My Life as an Eighties Montage!

May 31, 2011
I read a funny article from cracked.com about 80's montages. The montage was real popular in the eighties, usually with a cheesy soundtrack in the background. I often wondered if my life was a montage. Like if I could just montage my 9 months of pregnancy with "Eye of the Tiger" playing in the background! Did you notice that pizza and Pepsi were  usually consumed in the background?

I would get a positive pregnancy test and then the family and I would start dancing all footloose. Jon would say "Awesome!!"

Skip to the ultrasound! "It's a boy!" Aziz would be sipping his Pepsi and Aron would say "totally wicked!"

We would be shopping for the baby. I would be throwing things in the cart. Aziz would grin in between having bites of his pizza, Pizza sauce would drip on his hot pink muscle shirt. He will try to put his finger up to stop me from buying one item. I would take his pizza slice and dump it on his mullet. He would shrug his shoulders and lick the pizza sauce off of his fingers. Viki would throw in a "totally rad" outfit for the baby into the cart. Jon would be break dancing in the background. Aron would be laughing at his dad! 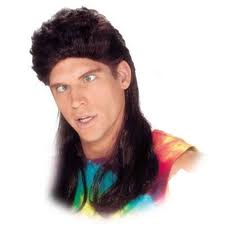 Scene to me going to the bathroom again and again and again. Aziz rolling his eyes and grinning. The clock with neon green numbers shows the times as 2AM, 2:15 AM, 2:30AM, etc.

My clothes are getting tighter and I sit and cry. Aziz pats my shoulder and brings me pizza and ice cream. The kids come in and break into a dance. Jon does a back flip in the background.

I have a totally radical baby shower. All of us women have our hair in perms and we go goo goo all over the new presents I got. Then we eat pizza! One woman walks in with a saxophone to perform the saxophone solo. We all cheer!

Scenes of me waddling around while the kids and Aziz jump around doing awesome moves around me.

Suddenly I stop-- "My water broke!!" The music stops with an echo effect. Everyone runs back to the car Aziz yelling the most "the time is here, I've got to get to the hospital!!" They get into the car and drive off without me. I roll my eyes, fold my arms, and tap my foot. Five seconds later they drive back and yell "sorry!'