Who is Banned From My Car Radio? 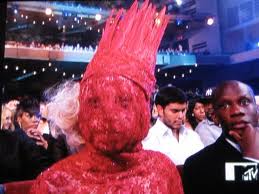 My husband complains that I flip radio stations around too much. However, there are some songs that I just refuse to listen to. They actually make me ANGRY!!! Here are some that are currently banned from my car-

Rihanna "S&M" - The title is nasty enough, but the line "sex in the air, I don't care, I like the smell of it" is enough to induce me to vomit. I also don't want to her my children repeat that line. Rihanna be so nasty! Maybe it is because I am pregnant and sensitive but the song "Umbrella" also makes me want to vomit. "It's raining, raining, Baby come into me!" Yeah, she isn't talking about the weather.

Anything by Ke$ha! My kids saw a Ke$ha video and decided she wasn't a good singer because she sings about drinking alcohol and acts trashy. Also her songs literally hurt my ears. They aren't really songs but electronic warble garble about being a slut! The constant auto tune makes me violent. My ear can only stand so many manufactured notes. We actually had fights start up for no reason during a Ke$ha song.

"Born This Way" Lady Gaga- Duh! I wonder what she meant by "Don't be a drag just be a queen!" Lady Gaga songs are really getting BORING! Be yourself! Thanks Lady Gaga, I felt so different and lonely until you came along! The thing is she is the mainstream nowadays! At least in the media world. Someone named Mary who wears modest clothing and sings about keeping her virginity until marriage would be the weird one today. You ain't different Gaga, you are a Madonna wannabe. Even the gay themed stuff isn't shocking anymore. "Bluffin' with my Muffin'" Gurl u be so nazty!! My kids are even bored of her! "Mommy, her songs sound all of the same!" says my 7 year old.  So the entire family banned Lady Gaga.

"Forget You" by Cee Lo Green- I love Cee Lo Green but this song is too obvious. I can't play it with kids in the car. Because of all of this "shhhi.. . . ." Radiohead back in the early 1990's did a better job censoring their song "Creep". Let's just say that I was in a bit of a shock when I heard the real version on CD.

"California Girls" Katy Perry- For some reason she just plain gets on my nerves. This song in particular is bad because "Girls so hot they make you melt your popsicle." Also, since when was wearing Daisy Dukes with bikinis on top sexy? 1982? Then for some dumb reason Snoop Dogg get paid loads of money just to talk over the song for some reason and laugh.

"DJ Got Us Falling in Love" Usher-  Mainly because of this- "Honey got me swishin' like a dreadlock, She don't wrestle, but I got her in a headlock, Yabba dabba do, make her bedrock, Mami on fire, pss, red hot." Maybe when my daughter is older I will use the lyrics to this songs as an example of men to stay away from. "Honey, if you are out dancing and if a guy says to you any of the lines from this song, run far, far, away. He just wants to put you in a headlock and make your bedrock and then dump you like you are trash."

There are many more. Right now my baby is hungry so it is time to eat!