August 10, 2011
What was the weather like today? I have no idea because I didn't go outside. We just chilled inside. I watched the BBC show Sherlock written by my favorite TV writer Steven Moffat who is over Doctor Who right now. We didn't want to go anywhere today! 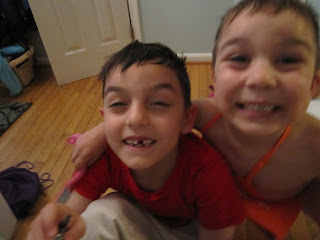 I am happy that Jon Jon and Aron have finally become friends. They not only play Xbox together but they also play Super Hero Squad! I have waited for years for them to finally play together. Aron was always the baby though and just wanted to be around his Mommy or Daddy. Now that he is no longer the baby of the family he has bonded more with his brother. Jon Jon is no longer a middle child. Things have evened out for him. I enjoy having four children. I think that for me it is the perfect amount of children. I was always told that four children are easier than three and now I understand better why. The older kids are more independent and helpful. They play and entertain the younger ones and the younger ones look up to their older siblings. I still have a lot of work to do but it is nice to not have to entertain the kids all day long.

Jon Jon is back in gymnastics. He is now at Youth Sports. He will still be able to compete at a level 5. It was fun watching him practice again. He was the smallest guy in his class! He was just as strong and fast as the bigger boys and did well his first day. I  noticed that he was in a happier mood today. Victoria will try Sport Aerobics tomorrow and Aron will go to a class on Saturday. Both classes match with Jon Jon's schedule making it easier for me. I don't want the crazy schedule I had last year again.