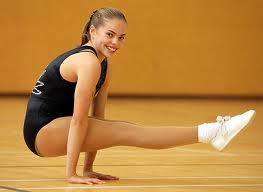 I remember when I first took Viki to gymnastics when she was 3. We were living in Hawaii and she took classes at Schofield Barracks. I believed my little cute girl was perfect for gymnastics. With every bounce on the trampoline and every walk on the balance beam I dreamed of gymnastics glory.

At the age of five, we put her in a very good gymnastics club in Hermitage, TN. One of her friends from kindergarten was already competing and doing well. Viki wanted to be like her friend so we put her in the girl's beginner class. The first two times were ok. The third time I noticed she wasn't smiling much. Suddenly, during warm ups, she began to cry. The coach took her out. I talked to her and tried to get her to go back inside to go to her class. With every refusal, my dream of seeing her as a gymnastics star faded away. It might have been my dream, but it wasn't for her. I accepted that and focused more on keeping her fit and active.

In Virginia, she saw pictures of rhythmic gymnastics and decided that looked like fun. We thought it looked so elegant. We were excited to watch it during the Olympics. It just happens that one of the best teams practice nearby our home so we signed her up. She was a natural and quickly developed the flexibility. They moved her up to pre-team and she practiced twice a week, four hours a week. Once they started doing back walkovers, Viki decided she had enough. She also hated the long hours necessary for rhythmic gymnastics.

She quit and did dance. Her brother Jon Jon continued gymnastics and surprised me by his talent. He ended up on the team and won 5th in state his first year. I knew I had a gymnast. I just focused on the wrong kid. Viki's talents lie elsewhere.

Viki decided that she wanted to do aerobic gymnastics for fun this year while waiting for Jon Jon's team practice. Aerobic gymnastics is also known as sport aerobics. It doesn't require back handsprings or walkovers! It is high impact and wore her out at the end of practice. She doesn't have any pressure to compete. She loved her first practice and I was happy to see her have fun. She still wants to try cheerleading but I have a feeling the tumbling will turn her away.

She isn't a gymnast, but she is still a wonderfully talented girl that I am proud of. (A little secret- she can sing so well that she once made me tear up)

Here is Jon Jon's former coach Diego DeVille competing in Aerobic Gymnastics. He is a wonderful coach and we miss him. We had to leave the gym he was at because they dropped our team. Diego was devastated because he loved working with the boys. He still coaches a girl's team that won first place at state. Jon Jon is slowly warming up to Coach Greg at Youth Sports and is doing well.

Sport Acrobatics (no gym in my area carries this sport that I know of, I think there is one in Wincester)

Trampoline and Tumbling (offered at Novak's in Dumfries)

Of course, there is rhythmic at Gymnastics World.