September 17, 2011
I was up late last night finishing off the laundry. I like to do laundry at night because it is cooler and quieter. I am also not interrupted. Little did I know in the quiet of the night a strange fume or invisible gas of some sort filled with an evil virus seeped in the cracks of my walls.

We had several missions to accomplish for the next day. Our van shuttle had to be detailed and Jon Jon had to go to his gymnastics training. We also needed a dehumidifier for the basement and shoes for Aron.

The next day I awoke to screaming. My five year old son Aron was screaming with no way to calm him down. He refused to eat. He kept talking about Spiderman Legos and other such nonsense. No matter what I tried the boy would not calm down. He acted as if in an angry drunken state.

Number One (otherwise known as husband) also exhibited strange behaviors. He had this delusional belief in making decisions alone as if he were single with no other crew members on board. He walked out of the house and drove away as I was readying the crew for one of our small missions of the day.
We ended the day with all of us fighting, yelling, and crying in our van shuttle.

We seek an antidote to this strange . . . MADness that has affected our crew. Perhaps simple rest will do or perhaps Aron was somehow infected with a Ceti eel. Hopefully a meeting with a medical officer will give us some answers.


In the meantime, I will have to administer the medicines I have available in the mess hall. I hope we will be able to continue with our daily missions and I will not be too affected in my abilities to command this ship.

In the meantime I have to put up with total chaos. 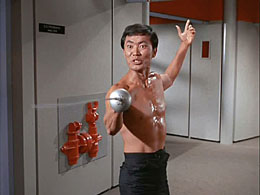