Halloween Sneaked a Snuck on Me

October 28, 2011
I was checking out my Facebook, which I do so rarely (totally hipster thing to say right now), and I noticed all of these Halloween pictures. Driving down the street I noticed a lot of Halloween decorations. What is this? October 28th already? What the . . . I forgot to decorate for Halloween! I didn't even carve a pumpkin or anything which is funny because Halloween is my favorite night of the year! The shock was so great that I just HAD to post about it on Facebook! If I don't post things on my mind I will explode! I wrote: "Halloween kind of snuck  . .. " and there it was a red squiggly line under the word snuck. (there it is again as I type!) When did "snuck" become ungrammatical?

Before you grammar Nazis come after me, I studied grammar at advanced levels while I was in college. For some reason the simple past tense of "sneak" never came up. (<-----preposition at the end of a sentence for  Mr. Swift! <----fragment!) I always told stories of how I snuck out of my house while my parents slept. A friend snuck up on me and scared me! I have used the word "snuck" all of my life! In proper grammar the word is "sneaked". That just sounds so unnatural. Maybe I am just a redneck!

Is it just me using this incorrect grammar? I looked up the word "snuck" in Google News and saw it used frequently in the newspaper so it is not a sign of being a redneck. I saw it used in the New Zealand Herald, ("Michael Douglas' Son Snuck Drugs into Prison", October 20, 2011) and on in the Toronto Sun. I checked the archives and saw the word back in 1909 in the Wall Street Journal though the Chicago Tribune of 1909 put the phrase "snuck out" in quotation marks as if it were slang. I went back to the 1860's and did find it used there. (Newspaper accounts of the Civil War are interesting though!)

After a little bit of research I found that snuck is common is America and not so common in Britain. It started out as being part of a dialect or slang. Usually we would use "snuck" as a phrase like "I snuck out of school." It just has more of the sound of doing something bad than "I sneaked out of the house."  I have been repeating over and over "I sneaked out last night." I don't know- sounds "ferrun". (foreign in Southern dialect)

In the end, this is a blog and I notice that people rarely write proper grammar in their blogs. I think Rosie O'Donnell started with her infamous free verse blog and I see it more and more. I personally write ungrammatically though I do try to be correct at times.

And that my readers is my blog's grammar time! 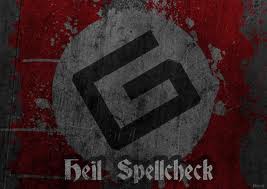