June 17, 2012
I found the book, Joy the Baker at my library and it has changed my life! I never was into baking and I am not a fan of cakes. This cookbook has changed my life. The book is filled with quick and easy recipes that are delicious! When I found out the book is based on a blog I was excited! 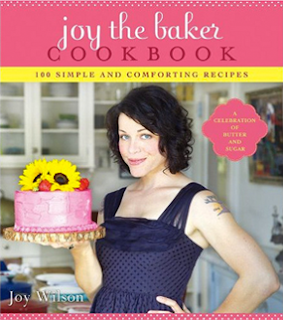 I read about the Texas Sheet cake and decided to give it a try. Miss Joy the Baker said it was always a hit at birthday parties so I wanted to see if the cake would be a hit at my party. Miss Joy the Baker hasn't let me down yet! I threw an impromptu party for Eli's first birthday. I invited a couple of friends to eat some cake an ice cream.

After taking the kids to gymnastics, aerobic gymnastics, Target, and two different parties you might think that I was insane to try to make a cake from scratch and then invite friends over. Somehow I pulled it off mainly because the cake was so easy to make. I was able to get it done in 20 minutes. Even the frosting was easy! I had enough time to help my daughter make mini vanilla cupcakes that were also made from scratch.

Was it a hit? The younger kids picked at it. They preferred the mini cupcakes and ice cream. The moist chocolate cake was a HUGE hit with us moms. We ate half of the 10x15 sheet cake among us. I don't even like chocolate cake but I couldn't stop eating it. As we enjoyed her recipe we talked about Joy the baker's outfit and thought she shouldn't wear a sleeveless dress while holding a cake. Her tatoos were also not popular with us. There is nothing better than munching down chocolate while criticizing someone's outfit.

I put in Ghirardelli cocoa in it. The cocoa was three times the cost of the other leading brand but was worth every penny. The only change I would make to the recipe is to put a little less than a cup of water.

The cake was simple, you just pour the batter into a jelly roll pan. There is no layering! I just spread the homemade frosting on it! Voila! Instant hit! A chocolate cake that isn't too rich or too sweet and that his perfectly moist.

I was hoping my one year old would make a mess with it. He just grabbed the piece of cake with his chubby fingers and threw the cake on the floor. I think he thought it was a toy.

Though it wasn't a hit with the younger kids, I would definitely recommend this cake for impromptu get-togethers, birthday parties for older kids or to cheer a sad female friend up.