I am in Canada and after two years of wanting it I finally had poutine. I tried poutine at Burger King and at Wendy's. It is expensive at $3.99. Actually, all Canadian fast food is more expensive. Wendy's Cheddar Cheeseburger was $2.09. (Canadian) 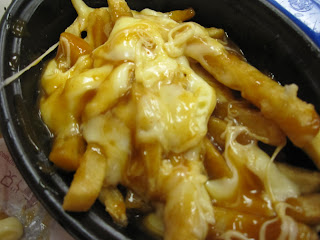 This is my picture of Burger King Poutine which was a HUGE hit with my kids. Burger King also has a spicy Angry Poutine. ARGHHHH!


Poutine is a French Canadian dish that is now a popular fast food side in Canada. It is a similar idea to American chili cheese fries. Poutine is brown gravy and cheese curds on french fries. The gravy is ok and the kids and I love the cheese curds. Jon was especially a fan and it helped him get over the fact we couldn't get ranch dressing! The poutine was saltier at Burger King but the fries had a better texture than the Wendy's poutine which was cheesier. I plan to have poutine one more time before going back to the USA.