January 16, 2013
"Antinous, who was alive but lately, and whom all were prompt, through fear, to worship as a god, though they knew both who he was and what was his origin."  Justin Martyr 150 AD 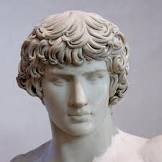 A few years ago my husband and I went to London. It was my husband's gift to me as he knows I am obsessed with British history. It was great to not only spend private time with my husband, but to see places that I have spent over 20 years of my life studying and reading about. I dragged my husband all over London to see my favorite places and to see the tombs of my favorite historical people. After a few days, my husband became tired and so I went to the British museum by myself. That was a very good decision because I got to take time to see the amazing exhibits and my dear husband got to have a quiet day to relax.

I was fascinated by the ancient British artifacts and saw the famous Sutton Hoo mask I read so much about. I teared up the in Medieval room as Medieval history is my specialty and in the US we don't get to see much of the Medieval. Being inches from a goblet held by Edward III was an amazing experience especially since I just found out the week before that he was one of my direct ancestors. Despite my emotional experiences that was not the highlight of my tour of the museum.

I was shocked to find that the Medieval and ancient Britain rooms were not the most impressive exhibits but that the Greek and Roman and the Egyptian rooms made this little historian excited like a little teeny bopper at a Justin Bieber concert. I felt like that partially after looking into the most beautiful face I had ever seen, that of Antinous, the lover of Hadrian a Roman Emperor who lived from 76- 138 AD.

I had never heard of Antinous before that time. I admit my knowledge of Ancient Rome is quite general. I did hear about Hadrian because of the famous Hadrian's Wall which steals the scene in the movie Robin Hood: Prince of Thieves. I had heard of the wall before watching that movie, but that was the first time it captured my imagination. Who was the great Hadrian so afraid of Picts that he built a wall to protect his empire from them? Well, that was the story I was always told.

It wasn't until that moment that I saw that beautiful face in the British Museum that I had even heard of Antinous, whose beauty so bewitched the powerful Roman Emperor. He was so beautiful that his image in a statue form caused me to blush. Reading the little blip about his life made me wonder if he was happy being worshiped by a Roman Emperor, himself considered a god on earth at that time. Antinous was a slave meant for Hadrian's pleasure. That was common enough in that time, but Hadrian literally lost his mind over this young man. Antinous drowned in the Nile River while journeying with Hadrian and historians aren't sure how he died exactly. Was it an accident, or did Hadrian sacrifice him because he didn't want anyone else to have Antinous? Did Antinous jump desiring freedom from this powerful older man?

After Antinous's early death, Hadrian deified him and made a cult to worship Antinous. This caused a scandal and the great Hadrian, who built a wall across the Isle of Britain was secretly mocked and scorned for his obsession of the beautiful boy. Two thousand years later, we no longer worship Antinous or any Roman emperor, but we can still be enchanted by the beauty of this man. I personally feel sad for him. All we know about him was that he was a handsome man. What did he think about? Was he scared or did he enjoy all of his attention? Was he the super model of his day?

I went to London to see my heroes of British history, but became more impressed by the artifacts of Ancient Empires and the face of a man who was worshiped simply because he was beautiful.

I read that the BBC did a radio play called "Caesar" and that Andrew Garfield (The Amazing Spiderman, the new Spiderman movie) was Antinous. With everyone pushing homosexual rights I am surprised that there aren't more Ancient Greek and Roman stories.

Do you think Andrew Garfield makes a good Antinous? Of course Caesar was a radio play so no one saw him anyways. 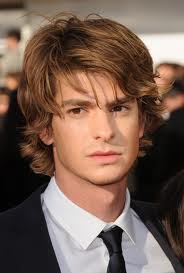 In keeping with a previous theme, Andrew Garfield was also in Doctor Who. He was in the episode, "Daleks in Manhattan" where he had a terrible Southern accent.