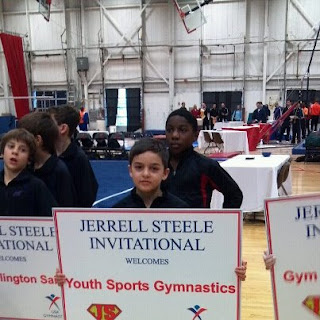 There is nothing that makes me happier than seeing my children smile. The past year gymnastics meets were not the place to see smiles. Jon did not place in a competition in over a year so what I usually saw at competitions was a tired shrug and a "maybe next time will be better."

Maybe this competition will be better. The Jerrell Steele competition in Richmond was one of my son's favorites. It was his first ever competition when he was Level 4. In his first event, he placed 1st and got 9th overall. Maybe that will boost his confidence and he will do better in this competition, only his second this season because of an earlier bout of norovirus last November.
My stomach was in knots as my son began his warm ups the first hour. I noticed his legs were not straight and though he successfully did every move, it wasn't clean. I could tell he was nervous and he slipped pretty bad when he practiced vault. Because I was by myself I could move freely around the stadium to take a close look at his routines. His team was in the same group with the top boy's gymnastics team- Capitol. He was also competing with teenager boys this time. Competing with the top team also caused us all to have knotted stomachs.
So the competition began with Jon Jon on parallel bars. Jon Jon was second which was to his advantage because he performed before the top Capital team. He had a clean performance with his legs falling out of a straight position only twice. He made a 9 out of 10, a pretty good start. I cheered and I saw a bright smile on his face. Progress! Next to the high bar, where Jon felt he could medal. He was next to last following amazing performances by the Capital team where there were scores close to 11! My stomach knotted as I feared that Jon would be scored low. Again, he did a clean routine and a successful kip. He got a 9.3! So far, a great start.
Now to floor exercises, one of Jon's strengths. He is flexible and can do all of the bonus moves. So he begins his routine. I was able to stand close to get a great view to take a video of his routine on his phone. Through the lenses of my camera I see him fall out of a handstand. He still got an 8.8 but I worry because now I fear he won't get a medal and we will have another disappointing meet. I go to buy him a candy gram so that he will be at least called to the front during the awards ceremony. Three more routines to go.
He was scored low on pommel horse but since he did not fall he was still not the lowest. I was told that he didn't hold his positions long enough and rushed himself too much. I thought it was a perfect 10! Rings was amazing. I watched the older boys do beautiful routines that were impressive. I knew Jon would score lower because he couldn't do the muscle up and those boys did a muscle up without much effort. Jon did a great routine but when he landed his hand touched the floor! Oh no! He made an 8.3. His last routine was the vault. He landed clean but the judges gave him an 8.1. Maybe his form was off. You never know with gymnastics scoring. Even at Olympic levels it doesn't always make much sense.  I heard parents complain about the rings judge because she scored their almost perfect boys low. She judged my Jon high for his flawed routine so you never know. He landed his vault but got a very low score. Vault scores are usually the least consistent but I was still disappointed. I wanted to steam and get angry until I overheard a boy tell his mom after he fell on vault, "I made a 7.1, I am happy!" It was then I was reminded that the boys aren't all about getting 1st place and being the best, they were having fun and just wanted to do their best.
I went to the awards ceremony and read the news on the phone and tried not to worry too much. Jon Jon would be fine I kept telling myself. I cheered when they gave Jon his candy gram. His cheeks were red and his grin was beaming as he ran up, grabbed his candy with an excited hop and skipped back to his seat. Maybe that would be his only chance to be in front of the crowed! Then they called out the awards. It was time to announce awards for the parallel bars. I figured a 9 would be too low so I began to continue reading on my phone. Then Jon's named was called. I instantly stood and cheered. He was in 7th place but he looked like he won an Olympic gold medal. He had a huge grin on his face. When the gymnasts saluted his hand shot up in the air with pride.
He skipped back to his seat in his funny dorky way and I waited for them to announce all around. I was curious to see who would get first place and then Jon and I would go home. They announced 11th and 10th place and since Jon Jon's name wasn't called I figured that he wouldn't medal since I didn't think he scored high. Then at 9th place- "Jon Jon Atakuziev!" Again I jumped and cheered and I saw the biggest smile of his life as he got his first all around medal in over a year. He looked right at me as if to say, "Mommy, I did it!"
Jon didn't get first place. He didn't even get top three, but he was getting better and his goal was to get a medal. He made his goal and we were both happy! We celebrated at Chick-fil-A where he ate his favorite spicy Chick-fil-A sandwich before the long ride home. My day was made because I saw my sweet boy smile with joy.