What is On Netflix

January 11, 2013
I always hear that having Netflix Streaming is not worth it, and that there is nothing ever on. It depends on what you are looking for. I find that Netflix is a perfect way to watch television shows. It is commercial free and you don't have to wait a week to watch the next episode. I have watched entire series in just a couple of days. That is especially easy to do with British Serials which run shorter than American ones. This superior way of watching shows may change the genre in the future. They will be called serials rather than TV shows and will be shown in a series rather than an episode at a time. (they are called series and serials in Europe)  I hope studios will make serials ready for streaming and maybe connect the serial to a website where viewers can get more information and give feedback about a serial in order to make additional money. I know Netflix previously came out with a serial Lilyhammer which I enjoyed except for the over use of the "f" word. (I think that is such an ugly word that ruins most shows) This format is working with British shows in America and why they have recently become popular. Doctor Who owes a lot to Netflix. I would like to know how many people started watching  Doctor Who because of Netflix before finding it on BBCA. (which cuts out a lot of the original material)  Anyway that is my rant and my hope for the genre of TV Shows. Here is what I am currently enjoying. MERLIN - I have found this show late. Thanks to Netflix I can enjoy it. You can tell it was made for Doctor Who fans. Merlin, the magician as a young man, has to protect Arthur and Camelot from dark forces. A different monster or evil magician threatens the realm each episode. A lot of the actors were also on Doctor Who which is a lot of fun. My kids can watch it with me which is also a plus. I am really loving Prince Arthur! 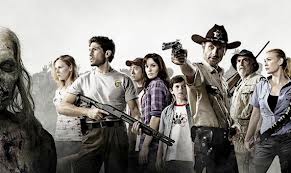 WALKING DEAD - The zombies are disgusting and scary but this show keeps you interested. The drama is amazing. This is a well directed and written show. Sometimes the actors are weak but the story shines through sometimes stilted acting. The characters do stupid things which annoy the audience but that is a trope in horror and an homage to all zombie horror movies of the past. Watching humanity survive through walking death is captivating. 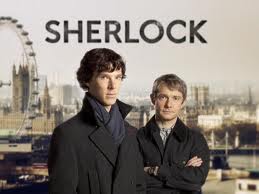 SHERLOCK - Another British show! This is from Steven Moffat who is now running Doctor Who. Sherlock stars one of my favorite actors- Benedict Cumberbatch. It is a retelling of the Sherlock Holmes stories placing them in the modern day. I like it better than Elementary, the American version.