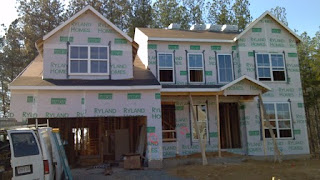 The last post I made was on Halloween! In the blogging world, I have fallen off the edge of the world! O really don't have much of an excuse except that I have had the worst writer's block. I struggled even to write a simple Tweet or a Facebook status. Changes in the country, family drama, and a new house are behind one of the greatest writer's blocks of my life!

As many of you know, I am a libertarian that votes GOP. I vote GOP mainly because of the two parties, the GOP stands for smaller government compared to the Democratic Party. I also do not like Democrat foreign policy and social programs. I am also staunchly anti-abortion except in extreme cases that should be between a doctor and patient instead of for social reasons. I was excited about Mitt Romney. He isn't the most libertarian candidate, but his ideas were more positive than Obama's. My husband and I worked hard for his campaign and the day before the election  I attended a rally for Mitt Romney with my kids. It was a lot of fun and my kids got to see the candidates in person. Obama still won and so his negative presidency where babies are a punishment and no one is responsible for their own success (it is all the government doncha know!) continues for four more years. It doesn't help that Obama reminds me of a brother-in-law I can't stand. Special snowflake men who think they are God's gift to earth grate on my nerves. So I became depressed about Obama's win which meant I had little patience about my family.

My mother's family is LDS. Her parents converted in the late 1950's in West Tennessee. I have no Utah roots. My family were LDS Tennessee pioneers and my grandfather was recently in the Memphis Tennessee Temple presidency. I have these cousins who were raised by my LDS grandparents in the church. As adults, they have turned away from the LDS church. That is their choice and their right. Being raised LDS doesn't mean you have to be a Mormon the rest of your life. These cousins however do not respect the family that has stayed LDS. They post all over Facebook drunk and half naked pictures. Pictures that would make an atheist blush. My grandfather is on Facebook and sees these posts. Another cousin who is more settled posts pictures of her at other churches and shows no promise of teaching her son about her LDS values. Again, that is their choice but they seem to forget the grandfather who pretty much raised them is on Facebook and their posts hurt him. They have no tact and are rude about the fact they turned away from the LDS beliefs. Well, my mother had enough and told one of my cousins to grow up after the cousin bragged about getting drunk on a Wednesday with her 3 year old daughter. My cousin and her friends began to argue and gang up on my mother. I had enough of the disrespect and told them all that the reason my mother said what she said is because she was raised LDS by her grandfather and her posts are hurtful and disrespectful to him. The next thing I knew my aunt, uncle, cousins all attacked me and now I am no longer a part of their life. I wasn't much a part of their lives anyway. I don't drink, watch race car driving, or go party at the lake on the weekends so there isn't much to talk about anyways.

Yes, I had to accept that my family is redneck. For years I lived in denial and was proud that instead of fishing and hunting we played tennis or went shopping. I thought education and having a respectful career was important to our family. I guess I was imagining another family. No, it is all about having fun and partying and being cool even though you are 45 years old. I love them I guess that is why it hurts to watch them throw their talented, beautiful lives away. They are adults and have the right to their choices so I will always welcome them in my life no matter how they choose to live their lives. I have noticed that instead of the traditional family progress of children living better than their parents, we are moving from respectful businessman to white trash. Yee haw!

So the only comfort I had dealing with the reality of my redneck family was improving my own life. This way is more difficult. I guess it would be easier to live simply and party all of the time. Trying to make something of your life is tough and filled with challenges. We are buying a bigger  house, not an easy thing to do in high priced Northern Virginia. Getting my kids the best education is a career in itself and my kids fight against it anytime they can. It takes a lot of money, paying for the maintenance of more than one property, feeding a family properly, extra classes for everyone in the family, When things break down, they tend to all break down at the same time. It also takes a lot of time. I have church, family, education, music, gymnastics, etc to take care of. I know it will be worth down the line, but right now it is stressful.

So that is my life right now and my lesson to the world- if you want a better life be prepared for a lot of hard work and challenges and don't worry about what choices others make. They are adults, so just be patient and don't take things personally. If you keep your faith things will work out in the end, including the cure of your writer's block.